For those who take it way too seriously 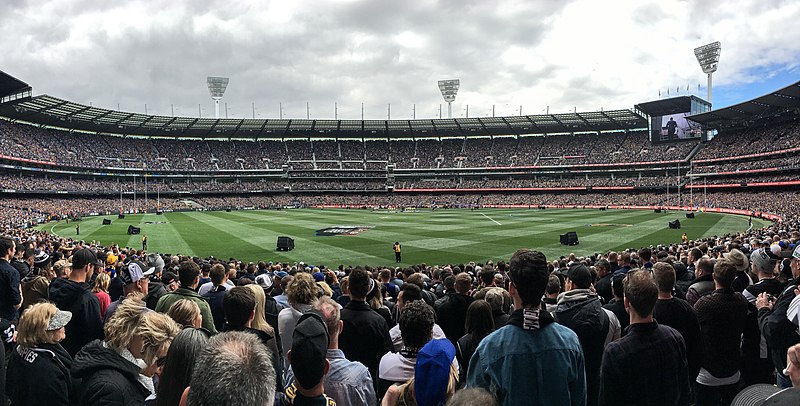 For sports fans outside of the country, it generally comes as something of a surprise to learn what the most popular sport in Australia is.

Most would anticipate the love of rugby – with both codes feverishly followed – to be reflected in huge attendances and TV viewing figures but it is actually Australian rules football that remains the most popular sport Down Under.

The AFL broke its own attendance record for a third consecutive year in 2019, with some 6,984,771 attending games in the competition.

That is a positive headline in itself, however the reality is that those numbers are actually stagnating somewhat. In 2005, the total AFL attendance was 6,283,788, so perhaps the competition isn’t moving forward as quickly in popularity as its organisers might like.

Will that manifest itself in the other sports gaining in numbers? Well, looking at the attendance figures of the Australian A-League, the country’s leading soccer tournament, the answer is perhaps not.

One sport that is bucking the trend for fan participation is rugby league, with the NRL enjoying a 2.29% increase in attendances from 2017 to 2018 – in real terms, that was some 60,000 or so people.

So why is rugby flourishing, whereas Aussie rules football and soccer crowds are, at best, flat-lining?

With the Marsh Series kicking off on Thursday, here’s our opportunity to discuss this years Rookie options and your report on them.

Here are a few talking points to consider in your assessments:

Got the SC side of the side rolled over. Still awaiting Fantasy AFL to get the rest of the way there though.

What's there though is enough to check stats, positions, salaries and do any ORFF stuff.

What's not in yet is Fantasy/DT, or any fixture related stuff (ie, Ticker or Salary predictions.)

Those will come in when the Fantasy side rolls in.

As always, let me know if I've borked anyone. I *think* I caught all the team and name changes, but then, I think that every year and always miss someone.

A quick refresher on the rules.

1. In order to get feedback on your own team, you must first provide feedback on the teams that have been recently posted. This is the golden rule and is what makes this whole thing work.

3. Please refrain from commenting on teams that have been posted by others that have not followed the golden rule.

4. Keep it civil. Constructive criticism is fine. But there is a line and please don't cross it.

We have all seen the complete devastation that these bushfires have destroyed of our beautiful country.

With over 300 fires raging, 12 million hectares destroyed, lives lost and up to 1/1 a billion animals, we haven’t seen such tragedy strike our shores for a long time. Considering the size of the impact, its no surprise that someone close to us could be affected.

Mike Penhall, aka @ThatKIGuy, is one of those – a TooSerious stalwart for years that has entertained us
with his posts & wit - managing numerous SuperCoach Keeper teams right here on TS has just this week lost everything he & his family have………

Mike is one of the Park Ranger’s on Kangaroo Island. Just last month he was off in NSW helping the local RFS fight fires to the north & returned last week to SA to go on a small vacay. A few days later he was called back to Kangaroo Island…..it was ablaze & all hands were needed. He has been there for 15 years – only 12 years ago they were under serious threat, but managed to repel the fires. This time they weren’t so lucky.

As the Section Commander, he was in charge of a crew assigned to protect the buildings in & around the Visitor’s Center – an area of numerous buildings, livelihoods – not to mention his home as well.

As much as they tried to defend, they were over-run by the intensity of the fires – every building within this Flinders Chase National park were destroyed – including Mike’s house where he, his wife Wendy and kids Matthew & Emily have resided in for years. His friends and fellow Rangers wiped out as well. Two friends burnt to death.

I reached out to Mike who is of course devastated – he noted that he felt guilty having his crew there under such conditions, but all were just following orders. He noted that they will rebuild the park, that he will be front & center for that and that it’s just been devastating for the community of Kangaroo Island – the homes, the livelihoods all lost. Hardly...
Continue...
2020 Too Serious ORFFW signups for keeper and annual (re)draft leagues
18 0 by TheTassieHawk : Dec 26, 2019 at 2:40 PM
Hi All,

As AFLW Draftstars is only a weekly comp we are one of the few full season fantasy comps on offer for AFLW next season – the other I know about is at SuperCoach Talk see https://supercoachtalk.com/aflw-fantasy-final-results/ for details of their 2019 competition. Hopefully success of our comp and others eslwwhere will lead to SuperCoach and RealDream team comps further down the track.

We are looking to grow numbers substantially so whether you are an AFLW fanatic, general fantasy football or fantasy sports fan or both please consider having a crack at either a keeper league or (re)draft format competition (or both). Also pass on the word to your family, mates and fantasy league buddies if you think they would be keen. Multiple leagues can be formed depending on how many entries we receive.

Whether you are a long time Too Serious member or otherwise we would love to have you joining in. If your fantasy football site of choice for AFL mens comps is elsewhere that is no issue and this comp will slot in nicely with those who compete in BBL supercoach and AFL Supercoach and AFL Fantasy comps.

As the AFLW season commences on Friday 7th February, 2020 pre-season drafts for AFLW comps will need to commence on or around Friday 24th January, depending on league size (ie 6 to 12 teams). AFLW player positions, league draft order, league draft starting time and other details for 2020 will therefore be finalized and listed by Thursday 16th January.

To join up for 2020 ORFFW comps either post below or send me a tweet at MystixORFFW @MOrffw indicating whether your preference is for a keeper league, annual draft league, or you are willing to sign up for one of each.

In 2019 the folks here at Too Serious held their first season long AFLW draft league – the ORFFW. Details are shown on the TS Leagues page found here
tooserious.net/forum/tsLeagues.php?leagueId=21&round=5

Thanks to the Chief we have also developed a player database with weekly stats for the AFLW regular season populated with Draftstars/AFL Fantasy Points for each player in the 2019 AFLW season.

http://tooserious.net/forum/stats.php?&comp=TS&sort=points&desc=desc
http://tooserious.net/forum/stats.php?&comp=TS&year=2-19&round=7&sort=points&desc=desc
Player dates of birth have been manually compiled from online sources and the 2019 AFLW prospectus and uploaded into the 2019 player database ready for it’s rollover into the 2020 season in January.

I have crunched some numbers using the positions in the player database which were the positions assigned by the 2019 AFLW Prospectus and used in the 2019 ORFFW draft league cross matched to player DOB’s. The results were as follows and my apologies in advance if you need to zoom your browsder page to 200% to see this:-

Not surprisingly average scores for Midfielders and Rucks far surpassed those for forwards and defenders. Durability appeared to be quite consistent across positions with players playing 1 or more games averaging 5.29 to 5.40 games per player per position.

Agewise it appears that younger and inexperienced AFLW players are much better equipped to step up to the big leagues than their male counterparts however the players born 1995 and earlier appear to be scoring at a higher rate on average than the under 23’s.

While an AFLW fantasy hundred is an elusive beast akin to a 160ish score in mens Supercoach the 26 centuries that were scored are interesting in their nature. Across the competition any randomly selected player would have around a 1.8% chance of tonning up in any...
Continue...
Saints are now legitimate outsiders for 2020 AFL glory
6 0 by walesy : Nov 12, 2019 at 10:11 AM
You may read this headline and think just hang on a minute there, it's a long way to go before being able to say anything like that with any certainty, and that isn’t necessarily untrue. It’s just that, on this occasion, you can’t help but admire what the Saints have done to increase their chances of enjoying next season a lot more.

Then again, it won’t take much to enjoy the 2020 AFL season more when comparing it to their 2019 league campaign after the Saints finished in a disappointing 14th position. There’s no getting around the fact that it was a hard slog for the Melbourne side after suffering 13 defeats and only registering nine wins.

So in many ways, it’s not hard to see why the Saints dived into the draft with both feet after such an underwhelming 2019. The work that Saints have carried out in the draft has been so effective that they have been ranked as the best performers in the 2019 trade, which certainly makes you sit up and take a bit more notice.

All in all, the Saints landed five players, including the impressive Bradley Hill. Other noticeable incomings include Dan Butler, Dougal Howard, Zak Jones, and Paddy Ryder, which in anyone’s book is good business it has to be said. Although not everyone is convinced or is sharing the optimism right now as the Saints sit at long odds of 50/1 in Aussie Rules betting to win the Grand Final.

It may be a case of 'seeing is believing' before people start taking the chances of the Saints seriously, and naturally, to beat the likes of Richmond, the reigning Grand Final champions after annihilating the Giants by 89 points, you will need everything to go right straight from the off....
Continue...
TS Fantasy NBA: '19/20 Draft Results
34 0 by anthak : Oct 21, 2019 at 12:55 AM
Our big 10th year running these leagues.
It was a scramble to fill the 4th league and we ended up with several people missing out in the end.